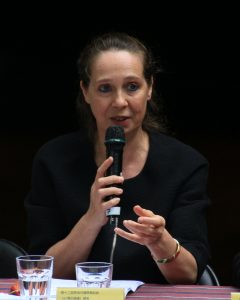 Ann Heylen, PhD, is Professor at the Department of Taiwan Culture, Languages and Literature, National Taiwan Normal University (NTNU), and Director of the International Taiwan Studies Center (ITSC), at the College of Liberal Arts, NTNU. She is a founding member of the European Association of Taiwan Studies (EATS) and Editor-in-Chief of the East Asian Journal of Popular Culture (EAJPC, published by Intellect, U.K.). Her research covers the history of Taiwan, from 17-20th century, with special attention to Dutch Formosa, the Japanese colonial period (1895-1945) and more recently the turn of the 19th century relations between the Low Countries and East Asia. Her publications include Japanese Models, Chinese Culture and the Dilemma of Taiwanese Language Reform (Wiesbaden: Harrasowitz, 2012) and Becoming Taiwan: From Colonialism to Democracy (Wiesbaden: Harrasowitz, 2010, co-edited by Scott Sommers).